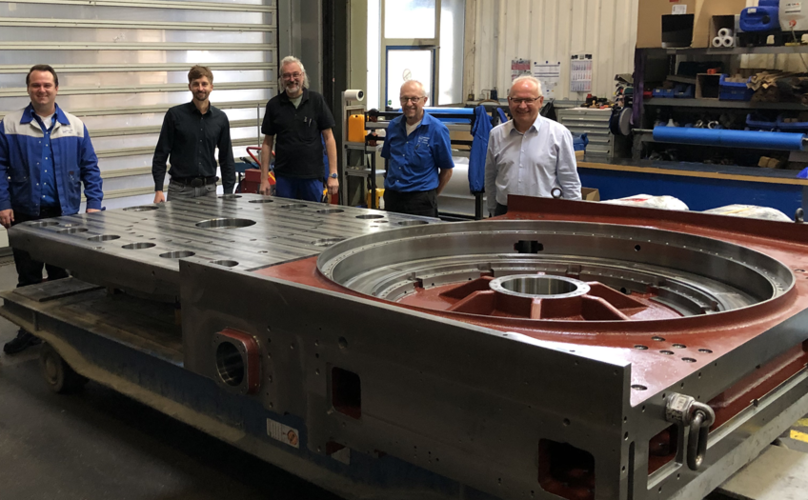 “We are a specialist for large, heavy machining centres" – BW can proudly state this after developing the 40 tons machine table. A machine project in Asia sparked off the special challenge to design a machine table, withstanding a spectacular workpiece weight of 40 tons + fixture which was a novelty for BW as well. From now on, gear box housings with a particularly notable weight for wind turbines are produced on this machine equipped with an XXL-table.

This project expanded BW’s portfolio and achieved a new level of workpiece handling.

To avoid collisions, the interference circle of the machine was defined in close cooperation with the customer for the respective workpiece. This is where the challenge for the BW-design engineers Andreas Fasold-Schmid and Richard Streib started off. New designs include a particularly rigid drive train, stronger clamping of the B-axis and a larger hydrostatic bearing. The design was constructed on a 20-tons table by effectively avoiding reinventing the wheel. Wherever possible, existing structural components were used.

"One of the biggest challenges was the space requirements," says Fasold-Schmid. Mainly the drives predefined the space demands. Compared to others, this project was realised by doubling the amount of motors as inertia need to be moved.

"Another special feature is the hydrostatic bearing," adds Streib. An external engineering partner assisted with the design to ensure accurate dimensioning. Thus, doubts could be resolved quickly and skilfully. The related higher oil demand and generated heat were determined by the technical department, and the pumps as well as the required pipe cross-sections and heat exchangers were designed accordingly. The objective was to integrate the machine table into an already existing product portfolio, which succeeded. Most remarkably, as the machine table was only raised by 50 mm compared to its smaller brother. Consequently, all approach dimensions of the milling spindle to the upper pallet edge can be upheld as before.

"In addition, we undertook FEM analyses to exclude all weak points and to study the behaviour of the complete machine. Because of the widely projecting workpiece, there are challenges with the dynamic stiffness that you must consider already in the design phase," says Fasold-Schmid.

Some hurdles also had to be taken during the procurement phase. Close coordination with the supplier was followed to be able to complete the particularly large table with an impressive turntable housing of 2 300 mm in length.

Meanwhile, the table has not only arrived at BW in Reutlingen but has also been assembled. The machine will then embark on its journey by ship at the beginning of 2022. This is a project that all involved will look back on with certain pride.

Let’s move to the next challenge.